In continuation of sensitization and mobilization of citizens towards the ongoing National Identity Number Registration by National Identity Card Management Commission (NIMC), staff of National Orientation Agency (NOA), Lagos Directorate on a Motorised campaign to communities and markets within Ogba/Agege Local Government Area, on Friday, 17th August, 2018, paid an advocacy visit to the Regent of Ogbaland, Prince Jelly Kehinde Asade  at the Asade Royal Palace, Ogba, Lagos State.
Addressing the Palace chiefs, women leaders, market leaders and youth leaders on the importance of National Identification Number (NIN), the Director, National Orientation Agency, Mr. Waheed Ishola spoke on the benefits and uses of the NIN and features on the Card which is not only for identifying oneself but also for carrying out financial transactions anywhere in the world. He noted that unlike the Permanent Voters Card (PVC) which is an optional political right for voting, the NIN is a compulsory life possession for every citizen and legal resident in Nigeria.
The Director urged the chiefs and leaders of the people to assist in mobilising their subjects and followers to go enmass for the registration at the nearest NIMC office or any of the following centers: GTB bank Oba Akran, Orile Agege Maternity by Powerline. He appealed to those who have enrolled and are yet to collect their cards to be patience as the cards will definitely come.
Answering various questions on eligibility, requirements and venue for the registration, the Director used the occasion to caution the people not to patronize or pay any money to roadside vendors who claimed to be registering people on behalf of NIMC, they are not agents of the Commission and not recognised by the Government.
In his speech, the Regent of Ogba-Land, Prince Jelly Kehinde Asade thanked the Director for the visit. He promised to assist the Agency in mobilizing the people for the exercise because it’s a right move in the right direction by the Government. In attendance were: Bale of Otubu, Chief Lateef Salako; Eletu of Ogba Land, Chief Oyewole Ashade; Ashipa of Ogba Land, Chief Adeshina Hameed; Alhaji S.A. Okanlawon, Chief S. Olutola amongst others. 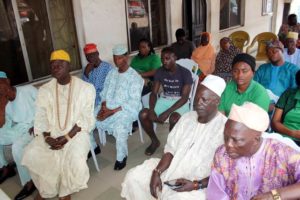 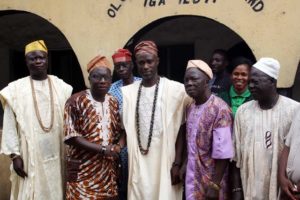 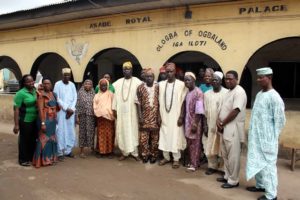 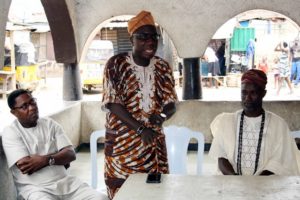