In continuation of its programme on Change Begins With Me: Conservation and Preservation of Public Assets and Infrastructures, the Kwara State Directorate of National Orientation Agency has held an interactive session, for stakeholders, where participants were charged to pay more attention to the security of public infrastructures.
The stakeholders’ forum, which was held in Ilorin, the State Capital had in attendance, the representatives of the  Nigeria Police, Nigeria Security and Civil Defence Corps, Nigeria Prison Service, Media Organizations, Traditional leaders, MDAs  as well as Assistant Directors/ COMOs of NOA Kwara State in the sixteen (16) LGAs.
While welcoming participants to the forum, Mr. Olusegun Adeyemi, the Director, Kwara NOA stated that a lot of Nigerians erroneously believe that public infrastructures belong to the government, and should be maintained and protected solely by government. He further affirmed that some Nigerians have forgotten, or do not know that these supposed government properties such as roads, buildings and pipelines actually belong to the people, and if they are destroyed, it would cost the government huge sums of taxpayers’ money to fix them, and such monies, could be channeled into Human Capital Development. He therefore reminded all and sundry that it is a collective responsibility to ensure that public infrastructures and assets are not allowed to be destroyed by ignorance, lackadaisical attitude or criminally- minded persons, whose activities should be reported if and when such destructive acts are observed.
In his keynote address, the NSCDC State Commandant, Commandant Adeyinka F. A, represented by his Deputy Commandant,  Babalola noted that Nigeria is endowed with various National Critical Assets and Infrastructures such as Power and Telecommunication Installations, Railway lines, Dams, Oil fields, as well as Mining’s products, and the continual damage and repair of these infrastructures will deplete the nation’s economy. He then encouraged individuals to cooperate with security agencies by sharing important information against vandalization of government infrastructure and other economic assets.
Furthermore, the representative of the Nigeria Police, Kwara Command, ACP Onuoha Bethrand commended NOA for organizing such a relevant programme at a time like this because, indeed, the orientation of Nigerians need to change towards public infrastructure. He noted that the police and other security agencies have been doing their best and would keep putting in more effort to secure these infrastructures.
Mr Segun Bailey Adeniji, the General Manager of Sobi FM who spoke on behalf of media practitioners noted that journalists and media houses have been doing their best in the sensitization of the public on the issue, through the broadcast of various jingles and use of their platform to discuss the vital issue of vandalization amongst others. He further pledged the media’s support for the sustenance of the campaign in Kwara and beyond.
There were critical submissions and contributions by the Magaji Are of Ilorin, Alh. Shuaib Aremu Zubair, DSP Oluwaseun Soretire (NPS), Mr. Olusegun Adeniji (GM Sobi FM Ilorin), Mr Kehinde Ajibade (Head of Programmes Albarka FM) , Babaijo Adeolu Otepola (D.D PRS NOA), NOA Assistant Directors and COMOs from the LGAs and representatives of MDAs who were unanimous in their submission, that true Nigerians must stop the ‘I don’t care attitude’ and be involved in providing security for public assets. They also emphasized the fact that government needs to pay more attention  to this issue by prosecuting arrested offenders and providing more funds for sensitizations as this, to hold at the grassroots level across the nation.
The highpoint of the event was the dramatization of the theme of the programme by Theatre for Development (TFD) NOA, Kwara State. 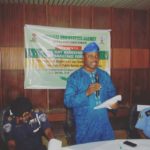 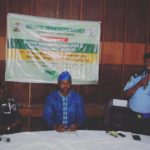 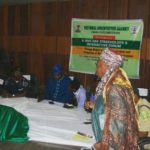 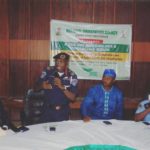 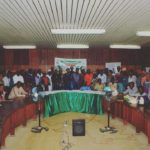