Government at all levels; the family unit, religious and traditional institutions and indeed every Nigerian have been admonished to play active roles in the fight against social vices, which are ravaging individuals, particularly the youths, and preventing them from contributing their best to national development.
This was the position of various speakers and resource persons during a one day programme with the theme ‘Security Sensitization And Re-Orientation Programme Against Political Thuggery, Kidnapping and Drug Addiction organized by the National Orientation Agency, Kwara State Directorate in pursuant of its mandate, and part of efforts to re-alert Nigerians, sensitize the general public and call people’s attention to the need to collectively tackle anti-social vices.
In his welcome address at the event, Mr. Olusegun Adeyemi, the State Director, National Orientation Agency, Kwara, bemoaned the recurrence of anti-social vices such as drug abuse, political thuggery and kidnapping in our society and highlighted their ripple effects on individuals and the society at large.
The NOA Director therefore called on Nigerian Youths to get engaged in activities that would enhance their personal development as well as prepare them for leadership roles, including elective positions, which they should seek for.
Mr Adeyemi further advised the youths to avoid negative peer influence, refuse to be pawns in the hands of selfish politicians who would definitely come around and attempt to use them for election rigging, snatching of ballot boxes, killings, maiming of political opponents and other social vices as the nation approaches the 2019 general elections.
In his own paper presentation with the title ‘Drug Abuse: Causes, Hazards, Roles and Efforts of NDLEA in the Eradication of the Menace’, the representative of NDLEA Kwara Commandant Mr. Ango Mohammed Tukur (PSO Training & Visa Clearance) from NDLEA noted that most of the crimes committed in the world have drug abuse at its foundation.
He defined drug as any chemical substance which when taken, changes the mode of the body system, and drug abuse has the excessive intake of drugs without prescription, most of which are self administered.
He emphasized that the NDLEA keeps trying its best in curbing the menace of drug abuse in our communities through sensitization, enlightenment, arrests and prosecution of drug offenders. He added that a reformation facility has been established where drug addicts and dealers are reformed and treated before releasing them into the society.
While making his own paper presentation, titled dangers and Effects of Political Thuggery and Kidnapping to Socio Political and Economic Development of Nigeria, the Police Public Relations Officer, Kwara State Command, DSP Ajayi Okasanmi noted that political thuggery is the criminalization of politics and when it is criminalized, it is left in the hands of ruffians and hooligans because the good people are scared away.
DSP Okasanmi highlighted unemployment, godfatherism and money politics as some of the reasons for the prevalence of political thuggery in Nigeria and proliferation of arms, militarization of the political environment and subversion of democratic order as some of its effects.
He concluded by urging politicians to think of the country over and above self and that government should provide better funding for NOA so that the Agency can carry out its core mandate of orientation and sensitization of the public.
The highpoint of the event was a lively and educating presentation by Theatre for Development, Kwara NOA. The playlet, which was in line with the theme, charged everyone to contribute their quota to eradication of vices because the results are always negative.
There were also goodwill messages and contributions  from participants at the well attended event which featured HRH, Oba Adegbite, the Ohoro of Shao, Alangua of Ibagun, Rep. of Igbo and Hausa communities, Rep.  of Permanent Secretary Youth & Sports Development, LifeFount Foundation, NAFDAC, NSCDC, Nigerian Airforce, NESREA, FOMWAN, MDAs, NGOs and Journalists from both the Print and Electronic Media 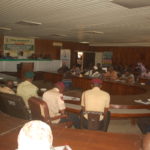 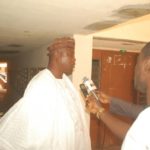 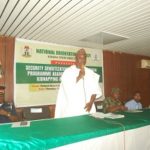