“Voter’s education is very key to any election”. The Director, National Orientation Agency (NOA), Lagos Directorate, Mr. Waheed Ishola made this assertion on Wednesday the 12th of December, 2018 during the first leg of Voter’s education of the three (3) Senatorial Districts of the State.  The event held at the Lagos Island Council Secretariat, Lagos West had a cross section of stakeholders in attendance.

Delivering his keynote address to the capacity filled hall, the Director, National Orientation Agency (NOA), Lagos State, Mr. Waheed Ishola went down memory lane to educate the people on why their full participation in electoral process of the country is important as against the voters apathy experienced in previous elections. He urged the people to see the sensitization exercise as an avenue to learn how to indentify correctly the symbols of their party of choice from the over 90 political parties registered by INEC, how to thumb print and vote correctly. Furthermore, he tasked participants to see that their members collect their authentic Permanent Voters Card (PVC) with which they can vote for the candidate of their choice, because unlike the previous election, it is the only means to vote.

On the charge, ‘change begins with me campaign’ he asked the              people to shun the bad habit of collecting money or gift from politicians to influence their vote, but to let their conscience be their watchword. He charged Community leaders, Market men and women to mobilise their members to actively participate in the election.

In his welcome speech, the Local Government Chairman, Lagos Island Local Government, Hon. Toyese Tijani Olusi, represented by the Chief of Staff, Mr. Olayigbade Yussuf, noted that the programme was timely because it would help the people perform their civic responsibilities, participate in governance and conduct themselves properly. He therefore implored participants to listen attentively to the various presentations. 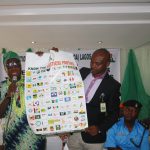 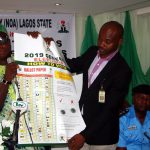 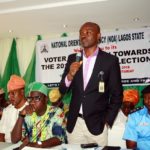 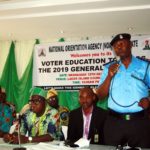 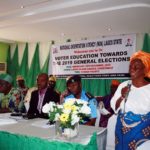 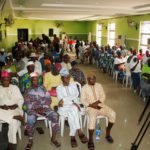 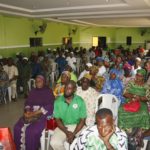 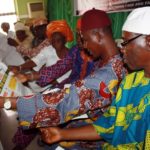