In continued fulfillment of the mandate of National Orientation Agency (NOA) in promoting positive value re-orientation in Nigeria, a one day sensitization campaign against social vices in Tertiary Institutions was on Thursday, 11th July, 2019 held at the Akinremi Makanjuola Lecture Theater of The Lagos State University (LASU), Ojo.

In the keynote address of the Director General, National Orientation Agency (NOA), Dr. Garba Abari, delivered by Mr. Bode Famose, Director, NOA Ondo State Directorate, the Director General noted that the focus on Tertiary Institution is informed by the fact that they contribute the greatest source of labour force that drives the process of governance and development. He observed that the primary purpose of the programme is to provide an interative platform where students can be sensitized and encouraged to shun all forms of social vices and imbibe desirable behaviours necessary for national development as well as key into the present administrations’ next level development agenda. He mentioned and talked on four (4) of the National Social Investment Programmes of the Federal Government which was established to tackle poverty, hunger, unemployment, restiveness and socially delinquent behaviour across the country. These are:

With the sensitization programme, the Agency hopes to draw the attention of youths (students) to the efforts of the government and encourage ownership and support of the programs to their benefits. He urged all the participants to be the advocate of the “Change” mantra of the government.

Addressing students on the heightened numbers of trafficking in drugs and persons, irregular migrants, International cross border crimes, deportations and repatriations etc, and its associated crimes, the Zonal Commander, National Agency for the Prohibition of Trafficking in Persons (NAPTIP) Lagos Zonal Command, Mr. Daniel Atokolo informed that the average age of trafficked children is 15 years. And that the number of Nigeria Girls in European Sex Trade is over 200 with Italy, West Europe to Mali, Morocco and by boat to Spain or West Coast to Libya or Saudi Arabia as common trafficking routes. Their means of transportation 90% is by road across the Sahara Desert, others through airports, seaports and bush paths. The Zonal Commander regretted that this girls are used as domestic servant and prostitution while the boys are used as scavengers, car washers, drug peddler, famers or bus conductors. About 8 million Nigeria Children are engaged in exploitative Child Labour. With video clips to show the negative effect and impact of Human Trafficking, he appealed to the students for face their studies squarely and shun the temptation for high taste of good things of life.

In his welcome address, the Director, NOA Lagos Directorate, Mr. Waheed Ishola represented by Mrs. Aderonke Jacobs, Deputy Director, Human Resources, commended the Vice-Chancellor and the Dean of Student Affairs of Lagos State University (LASU) for their warm reception and kind approval in hosting the programme with access to all the necessary facilities at a very short notice. He observed that the choice of LASU was because it’s one of the foremost tertiary institution in Nigeria with controllable cases of social misdemeanor. He enjoined the students and participants to shun all forms of social vices and embrace the National Core Values and desirable behaviours necessary for national development. 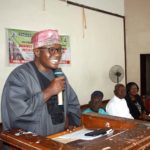 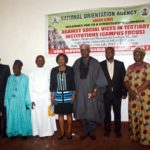 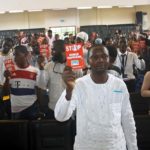 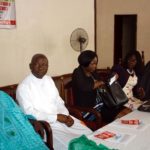