The ongoing registration of National Identity Card (NIC) and the National Identity Number (NIN) by the National Identity Management Commission (NIMC) in the State has been observed to be going on a slow space compared to what is obtained in some other States of the federation. The low pace of the exercise in the State is attributed largely to inadequate knowledge of the exercise and the derivable benefits of the exercise which is lacking among the teaming population of the State. Report showed that of over three million people in the State, only three hundred thousand had so far been registered. This is a serious concern to not only the Commission, but also to the policy makers who use statistic in planning. In order to bridge this wide gap, through intensive and rigorous enlightenment and mobilization of the populace, the National Orientation Agency in collaboration with the State office of the National Identity Management Commission, organized a one day capacity building for the staff of the Agency. The programme was aimed at equipping them with basic knowledge and skills on how best they can sensitize and mobilize the rural and urban residents towards active participation in the exercise.

Target Participants: NOA State Headquarters’ staff and COMOs along with one staff each from the 13 Local Governments of the State.  Commencement: The programme commenced with National prayer (second stanza of the National Anthem) and was followed with the introduction of all the participants.

Welcome Remark: The Acting State Director, Mrs. Priscilla Gondoaluor in her welcome address informed the NIMC management that, NOA is the Agency of government saddled with the responsibility of promoting policies and programmes of the government and the staff are well positioned to assist the Commission in sensitizing the citizens on the importance and benefits of the National Identity Card and the usefulness of the National Identification Number (NIN).The State Director also urged the staff of NOA to be attentive to understand the policy so as to launch out the appropriate messages effectively.

Presentation: The NIMC State Co-ordinator Mr. Shuiabu D. Ajanaku in his remarks stated that, the registration is aimed at enrolling all eligible Nigerians hence, the need to intensify awareness and sensitize the masses, especially in Nasarawa State where the enrolment has been dismal. According to him, Nasarawa State has an estimated population of over 3 million people and so far it is only 300,000 people who have so far been enrolled. He identified NOA’s vital role in making sure that the people of Nasarawa State are well sensitized and participated fully in the programme, hence the collaboration.

He highlighted some of the benefits of the NIN to include;

Interactive session: During the session, there were experiences shared especially on the distances people have to cover before reaching the registration centres and malfunctioning of equipments and breakdown of power source as some of the challenges that discourage people from coming out for the exercise in some quarters.

Some questions by participants bordered on the delay in issuance of the permanent card after several years of registration. The NIMC officials said the processing period has been improved and that the most important part of the Identity Card is the NIN.

Presentation by INEC: Though the programme was to educate the staff on the benefits of NIC and NIN, the Directorate deemed it fit to feature INEC on the programme to also talk on the benefits of the Permanent Voter’s Card. Accordingly, the representative of INEC Alh. Mohammed Tukura informed the participants that, the registration of voters’ card will be ending on 17/8/2018 nationwide and alot of the eligible voters have not yet registered or collected their PVCs, while the Commission has already released the election timetable for the conduct of the 2019 general elections. He therefore, solicited the co-operation of NOA to help in enlightening members of the public on the importance of the PVC during and after elections.

At the end of the programme, staff were issued lists of Registration centres all over the state for guidance and ACTION POINTS which they were to follow in the enlightenment campaign particularly at the local government areas. Also,Information ,Enlightenment and Communication (IEC) materials were distributed to all COMOs to be used for the exercise in the Local government areas.

There were suggestions to both NIMC and INEC that considering the importance of the two documents, the two organizations should  improve on their programmes; particularly in the area of information dissemination, awareness creation and citizenship orientation towards effective policies and programmes of the government. Consequently, the NOA, NIMC, INEC have accepted to partner one another for the development of the country.

The programme came to an end with a vote of thanks by the Deputy Director, Programmes Mr. Elisha Umaru and group photographs by both NOA staff, NIMC, INEC and the WAI Brigade(Find attached) at about 4:15pm. 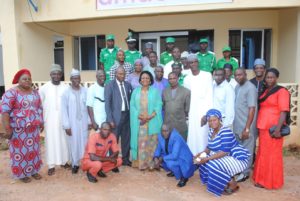 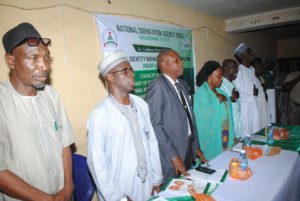 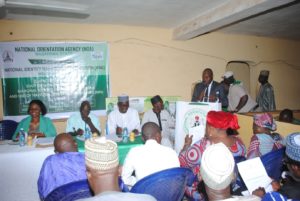