Photo In Lagos Falsely Used To Depict Unrest In Abuja 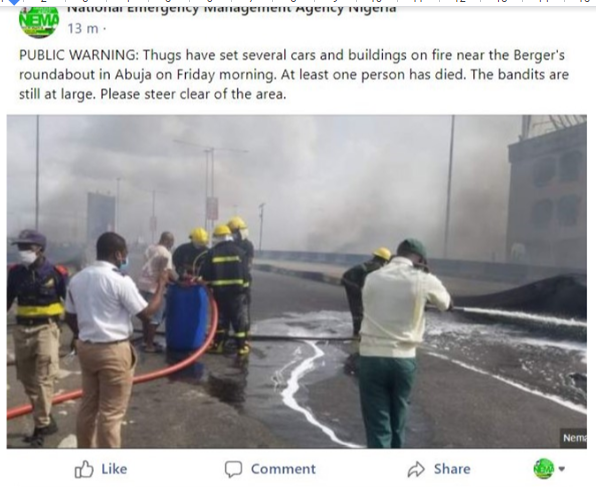 A photo of firefighters trying to put out a fire on Lagos Eko Bridge was used to describe thugs setting cars on fire around Berger roundabout in Abuja. The photo suggests insecurity in the Federal Capital Territory, Abuja.

The claim that thugs have set several cars and buildings on fire near the Berger Roundabout in Abuja on Friday morning is false. Findings show that the acclaimed location was in Lagos and not in Abuja, as alleged.

Due to the frequent fire outbreak in the Country as a result of factors such as electrical surge, cooking in market places and indiscriminate bush burning leading to several loss of lives and properties. A facebook user posing as a NEMA official claims  that thugs have set several cars and buildings on fire near the Berger Roundabout in Abuja on Friday morning.

It is reported that one person died as a result and the Bandits are still at large, cautioning people to steer clear of the area.

The story has gone viral and has been viewed by multiple users on Facebook.

A google reverse search of the image was done. Several images turned up which showed Apongbon market fire on Eko Bridge Lagos. The fire incident took place on 23 March 2022.

News Planet Nigeria also reported the story of the fire outbreak in Apongbon, which gutted motorists, shops and the entire Apongbon area. Another search on the website also showed that the Nation’s newspaper reported that the incident did not happen at Berger rather, it occurred   at Apongbon, Eko Bridge, Lagos State.

The above picture highlighted the acclaimed place was  in Berger roundabout Abuja. A search on google  maps revealed the location to be Apongbon, Eko, Bridge, Lagos State and the features are circled (red) on the image above.

Due to the above verification, it is concluded that the above claim is false.