PRESERVATION AND PROTECTION OF PUBLIC ASSETS AND INFRASTRUCTURES, AND SUNDRY ISSUES, NOA TAKES ADVOCACY TO OLOMU OF OMUPO

In recognition of the critical roles which traditional leaders play in the society and as part of efforts towards sustaining the Agency’s campaign, the Kwara State Directorate of National Orientation Agency has gone on an advocacy visit to HRH Oba Alh. Yakubu Adebayo Buari, the Olomu of Omupo, his council in chiefs and community members  to reiterate the need for communities to protect public infrastructures within their domain and to also contribute to good governance as well as national development.

Leading the advocacy team to the Olomu’s palace was Mr. Olusegun Adeyemi, the State Director, NOA Kwara who commended the Omupo community for their past efforts in protecting public facilities within their domain and ensuring that peace reigns in the community.

The NOA Director further bemoaned the attitude of many Nigerians to public asset, which makes them act in such a way that portrays public infrastructures such as pipe borne water, electricity cables, roads etc as government property and should be maintained and protected solely by government. He noted that protecting public infrastructure is a collective responsibility and people must shun lackadaisical attitude and report criminally- minded persons, whose stock in trade is to destroy such facilities.

Mr Adeyemi also emphasized the need for residents and people of Omupo community to register for and collect their Permanent Voters Card, despite the fact that the Ifelodun Local Government headquarters is far from Omupo. He charged them to shun voter apathy because good governance is a task for all and sundry.

On the issue of National Identity card, Mr Olusegun Adeyemi sensitized the gathering on the benefits of obtaining the National identity Number as well as the card because therein are all the personal data of individuals which may be required for official transactions in some cases. He also explained that the card can serve the dual purpose of completing Bank transactions home and abroad, hence, the community should play their part in ensuring that people within the ancient town are not denied of this opportunity.

In his response, the Olomu of Omupo, HRH Oba Alh. Yakubu Adebayo Buari Ilufemiloye II appreciated the Agency for the timely visit, as the community already had several issues on which they needed government intervention and assistance. The monarch stated that as a community, the Omupo people are always at the forefront of ensuring the safety of public infrastructures because they understand the fact that their people are the direct beneficiaries of these assets, hence they do not wait for the federal or state government to repair some of these facilities when they are faulty.

Oba Yakubu Adebayo also stated that the community has a major challenge with PVC registration and collection because the Ifelodun Local Government Headquarters which is located in Share is quite far from Omupo and most times, Omupo people who go ahead for the registration are unable to get it done in a day and have to keep traveling and spending huge sums of money. In view of the above, the king pleaded with relevant government agencies to consider bringing a registration point to the community because Ifelodun LGA is the biggest in the country, while Omupo is the district headquarters in the LGA and the community would be willing to provide all the necessary support to ensure that Omupo residents get their PVC and National identity number.

The NOA Director thereafter presented some souvenirs to the traditional ruler and promised to deliver the community’s message to the appropriate quarters. 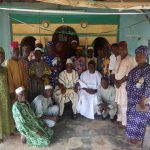 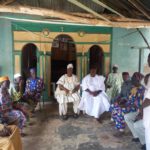 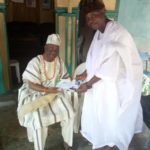