SAY “NO TO VOID VOTES” DIRECTOR NOA TASK YOUTHS AT THE VOTER EDUCATION FORUM ON REDUCING THE INCIDENCES OF VOID VOTES ORGANISED BY THE CARRINGTON YOUTH FELLOWSHIP INITIATIVE (CYFI).

The 2019 General Elections are very much around the corner. In a few days time, the ugly trend of void votes often referred to as wasted, rejected or invalid votes might again resurface and make nonsense of the elections. To this end, the Carrington Youth Fellowship, an initiative of the U.S. Consulate General, on Thursday 7th February, 2019 held Voter’s Education and Sensitization Session with the theme: “Bold Measures, Ballot Power”, at the Civic Hive, 42 Montgomery Road, Yaba, Lagos State.

Speaking on “Reducing the Incidences of Void Votes, the Director, National Orientation Agency (NOA), Lagos Directorate, Mr. Waheed Ishola noted with displeasure the poor turn-out of Youths to such an important occasion. Considering the huge number of 844, 519 voided votes recorded in the last general elections of 2015, the need to tackle the dangerous trend starts with the youths. The Director defined void vote as when a ballot is considered invalid. That is, when vote does not count or if electoral officials are unable to clearly determine the intention of the voter as a result of the following:

He explained that all the above is as a result of ignorance and poor voter education of the people. In some cases people deliberately void their votes due to oath of financial inducement received from two or more political parties. In order to drastically reduce or completely eliminate the void vote issues in our political process, the Director noted that National Orientation Agency had embarked on nationwide public enlightenment campaigns visiting various motor parks, markets and other public places ahead of the 2019 general elections. He tasked the Youths to resist the temptation of being used to incite violence at polling units, snatch ballot boxes, attack opponents, tear posters, destroy bill boards and other electoral malpractices, but to rise up to the clarion call and say “No to Void Votes.

Addressing the audience, the Consular Officer, U.S. Consulate General, Lagos, Mr. Ben Gordon admonished participants to be interested in the governance process of the country because they are the future leaders. He noted that the Consulate supports groups of young people with good projects in education, health and now in political awareness. Its decision making time and there should not be such things as a vote does not count. Youths are to take bold measures and implement their rights.

Other speakers at the event are the representative of INEC, Mr. Luka Buba, officer in charge of Voter Education, INEC Lagos and Mr. Niyi Soleye, HR Manager, BudgIT.

In attendance were: Various Youth bodies, Civil Society Organisations; the Academia amongst others. 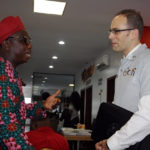 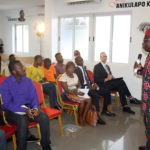 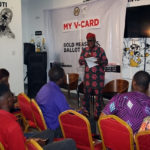 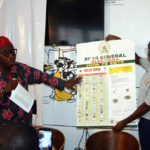 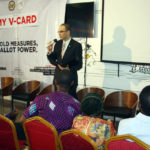 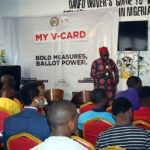