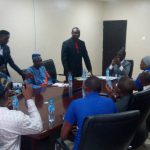 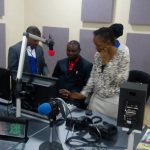 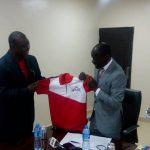 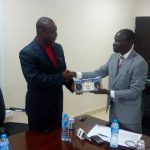 As the Kwara State Directorate of National Orientation Agency continues its efforts at sensitizing and enlightening the masses through collaborative efforts with relevant organizations, the Acting State Director Mr. Olusegun Adeyemi led some members of his Management team on an official visit to Sobi 101.9 FM, the newest radio station in Ilorin the State Capital of Kwara.
Mr Olusegun Adeyemi, while addressing the General Manager of Sobi FM, commended the efforts of the radio station, as the feedback gotten from the public on the quality of transmission since inception, were positive. He urged the management of the Sobi FM Radio Station not to sacrifice it social responsibilities  on alter of commercial concern . The State Director  thereafter briefed the GM on  the activities of NOA, at both the National Headquarters and in Kwara State, emphasizing that the Agency not only provides timely information to the public, it also takes back credible feedback to the government, serving as a medium between the government and the people. The NOA Director noted that the present administration led by President Muhammadu Buhari is working tirelessly to bring about positive changes in all areas especially in security as well as the economy and he urged all and sundry to support the government.
Responding, the General Manager of Sobi FM, Mr Segun Bailey Adeniji urged NOA to keep us its good work and expressed his readiness to partner with the Agency in the task of nation building. Mr. Bailey emphasized that Sobi FM is neither a product of any political party nor influenced by ethnicity. According to him, the station is committed to professionalism in its reportage of events as its staff are properly trained and prepared to give the public the best of entertainment, education and balanced information.